The Venture Catalyst Space program is part of the University of South Australia’s Innovation and Collaboration Centre (ICC), the first of its kind in Australia and a leader in space innovation and business acceleration.

ICC Associate Director Jasmine Vreugdenburg said the program continues to attract space startups from around the world wanting to be part of the home of space in Australia.

“By bringing new technologies and high-growth startups through our program, we are contributing to the growing space industry in Australia and putting Adelaide on the map as the centre of gravity for space activity,” Vreugdenburg said.

“The applicants want to come here because they have seen the success of other companies that have been through the program like Lux, Astrogate Labs and Ping which are a testament to the world-class quality of the program which can only be achieved with the support of our space ecosystem partners.”

Dr Giles Kirby the founder and chief scientist of South Australia company Firefly Biotech, one of the nine startups chosen, said the program will help speed up the pace of development.

“I think having that centralised spot in the city along with the training and support, it really helps build a community,” said Kirby.

“We are moving so much faster than we would have been able to by ourselves and it feels like they are really investing in the future of Australia.

“It’s really nice to see some market growth in a market that has got a lot of potential in the next 10 years.”

Firefly Biotech develops tools and processes to make biological research in space accessible with tools such as microgravity simulators.

“We are currently getting our tools into the hands of the people using them, developing some alpha models to get them out there, get them refined, get them used,” Kirby said.

The other companies taking part in the program are South Australia’s Locus Rose, Hex20, Moonlode and SPACELIS, joined by India’s 114ai and Digantara, Astroport Space Technologies from the USA and satsearch from the Netherlands. 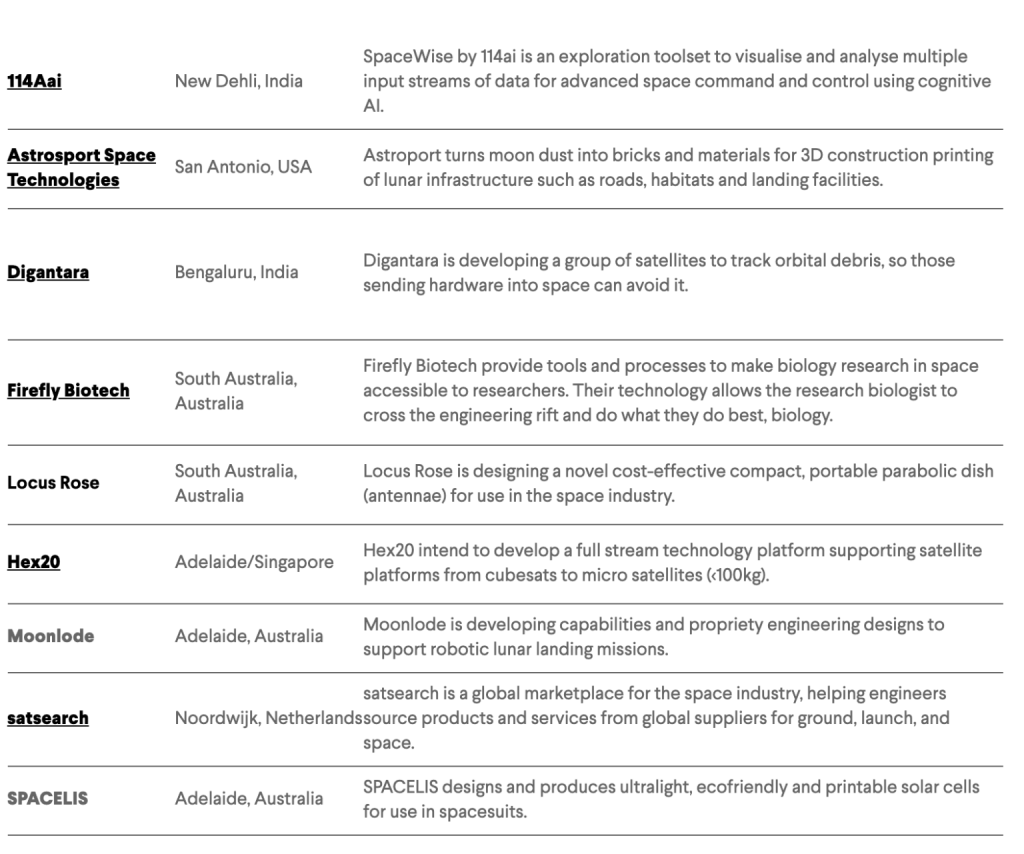 Each of the startups will receive $10,000 funding and support from the South Australian Government, with the international companies receiving the funds once they commit to relocating to South Australia.

The startups will also receive advice and guidance from global industry experts such as Kirk Drage and his consulting company LeapSheep and key representatives from the space industry including former NASA astronaut and space shuttle commander Pam Melroy.

South Australian company Ping Services was part of the first cohort of the Venture Catalyst Space program in 2018 and created the Ping Monitor which measures the health of a wind turbine based on its acoustic signature and sound generated by the turbine blades as they rotate.

Ping has since liaised with most of the major wind turbine operators in Australia, Europe and the United States.

Adelaide will host the 11th Australian Space Forum on Wednesday (31st March) at the Adelaide Convention Centre, which will be the largest industry exhibition in the event’s history with 65 exhibitors.

Talk to us about your new project